Preparing for a mission in Godfall, out next week on PS5 – PlayStation.Blog

Our team at Counterplay Games can’t wait for you to get your hands on Godfall when it launches on PlayStation 5 on November 12th. That’s when the real fun begins! Before that though, we’re proud to share with you today our launch trailer.

We hope you are ready to fight through the challenges — and earn rewards — as you save the world of Aperion. Our passionate team is so thankful for all the support and encouragement we’ve already received. We have been working tirelessly to create a beautiful world for you to explore, as well as creating an engaging experience filled with lots of combat and, of course, loot to collect.

We can’t believe we’re just one week away from the launch of Godfall and PS5. We wanted to give you a final look at the game before launch, so we’ll be walking you through how to set up your custom loadout in Seventh Sanctum, your home base within Aperion. After that, we’ll dive into how you can put that loadout to the test by giving you a brief peek at the first boss fight in the Water Realm against Thraex.

Preparing for your mission

In the Seventh Sanctum, you’re totally safe to practice your moves with the training construct. You can swap Valorplates, choose your loadout, upgrade loot at the Forge, and organize your party for co-op. 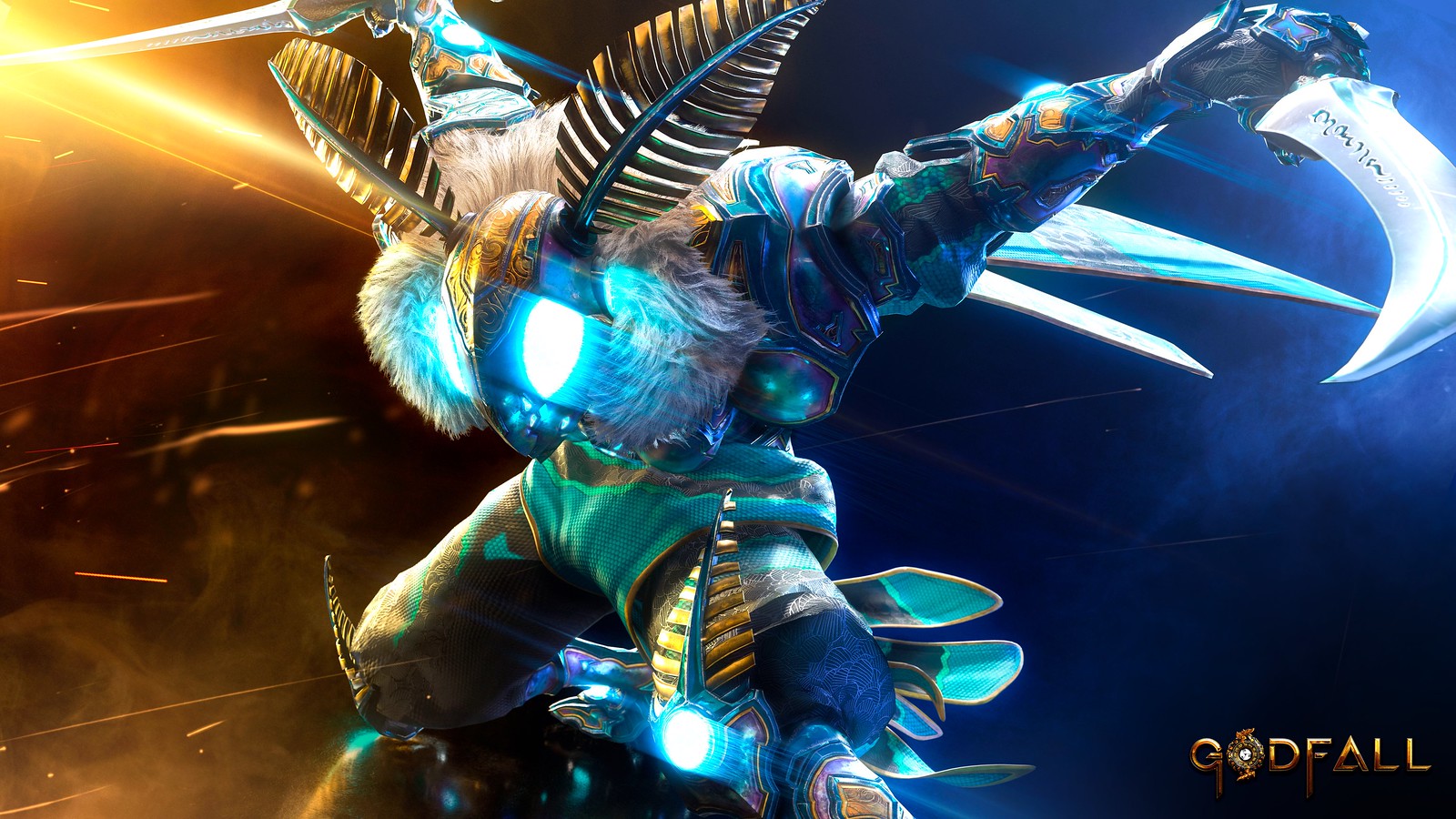 Before you hop into a mission, you should select the Valorplate that you think will work best. For example, you could utilize Vertigo. Her Valorplate symbolizes wisdom, and allows us to supercharge our shock damage, rewarding electrifying build paths that deal damage over time.

Once you’ve chosen a Valorplate, it’s time to get started on how you’ll get equipped. 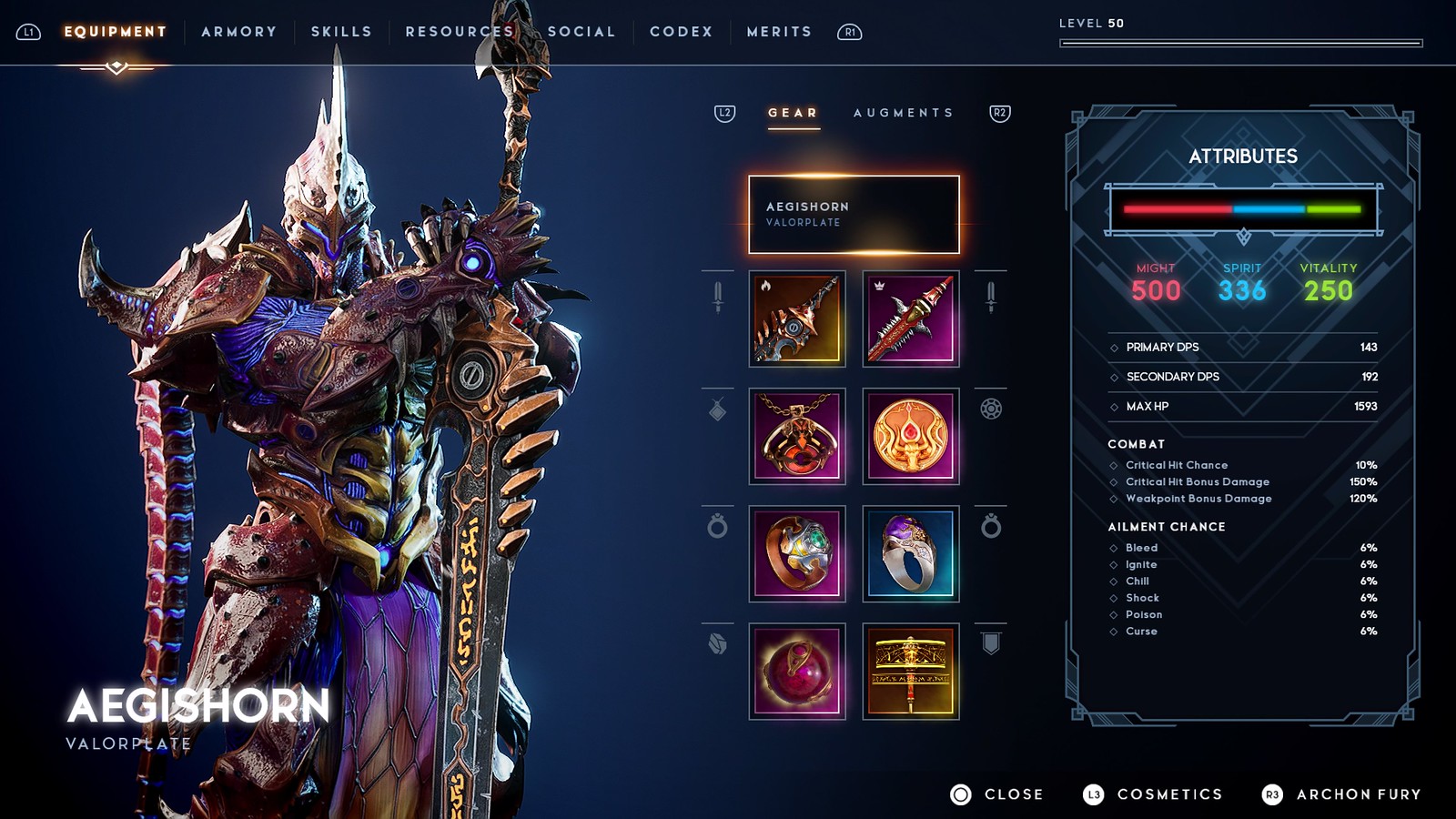 The character screen helps you understand your build at a glance. On the far right, you can see your overall stats and primary attributes. Might tracks your standard attack damage, Spirit increases ability damage, and Vitality represents your overall health. You will also see additional information like your chance at a critical strike, etc.

You have eight distinct equipment slots to utilize within Godfall: two weapons, one charm, one amulet, two rings, one lifestone, and a banner. All of these pieces of equipment help modify and amplify key stats. Today we’re going to look a bit closer at weapons, lifestones and banners.

Weapons are a key part of Godfall and change up your playstyle, moveset, and damage type. You can quickly swap between any two weapons and equip new ones on the fly if you find something great in the field. When choosing weapons, you can see their detailed stats, special effects, and a closeup look at the weapon itself.

Take Retribution, for example. It is a two-handed Greatsword to carve through mobs.

We could also utilize Stormflayers, a set of Dual Blades for quick single-target DPS.

Lifestones restore health, allowing you to keep fighting. They can also trigger powerful effects, giving you the edge in tough combat.

Banners are AoE buffs that affect you and your co-op allies. These effects stack with other banners your allies drop, allowing your team to choose a moment to truly dominate the battlefield.

Once you’re all equipped and ready to go, you will head to the Holomap to select your mission. Today, we’ll talk a bit more about the first boss fight in the first mission of the Water Realm where you fight the mighty Thraex.

As you reach the end of Tormentor’s Asylum, you’ll find a room housing the Thraex. The Thraex are proto-dragons that are extremely territorial, making them excellent guardians, like a fire-breathing German Shepard.

This challenging fight will require every tool in your arsenal. Banner up, throw on Archon Mode, and lay into the beast while dancing around its attacks.

The most dangerous place to be is right in front of it. Use side dodges to get a good angle of attack and sneak in a few strikes before the Thraex counters. And when it fires its laser, make sure to get that shield up or slide on under.

Managing your cooldowns, like your Shield Throw and weapon special abilities is key. Handle all of this, and you’ll handle the Thraex and earn yourself some well deserved loot!

See you at launch

In the full game, you can embark on a full campaign as well as sidequests called Hunts that provide even more challenging versions of this boss and others. Once you’re through the main story, endgame challenges await you with Dreamstones and the Tower of Trials.

We hope you enjoyed this dive into Godfall’s build system and a boss fight. We can’t wait for you to experience every mission, realm, Valorplate, and weapon we have in store for you and your friends on PS5 on November 12. And if you pre-order today, you’ll earn some exclusive loot as well. From all of us at Counterplay, thank you and we’ll see you at launch.

Prepare to bark, bite and bounce as PHOGS! release date is confirmed along with Xbox Game Pass