Well here we are… Jump on the Gravel Pit as Wu-Tang and The Sugarhill Gang join FUSER: A Big Adventure has finally hit the shelves. Bursting with the most incredible roster of new (and old!) music, and built on a completely revamped interactive system, the soundtrack is by far the heftiest we’ve ever assembled for the franchise. So I wanted to take this opportunity to share a few insights into what we’ve been doing for the last couple of years, as well as touch on what you can expect to hear when you embark on your own Big Adventure. No spoilers though! 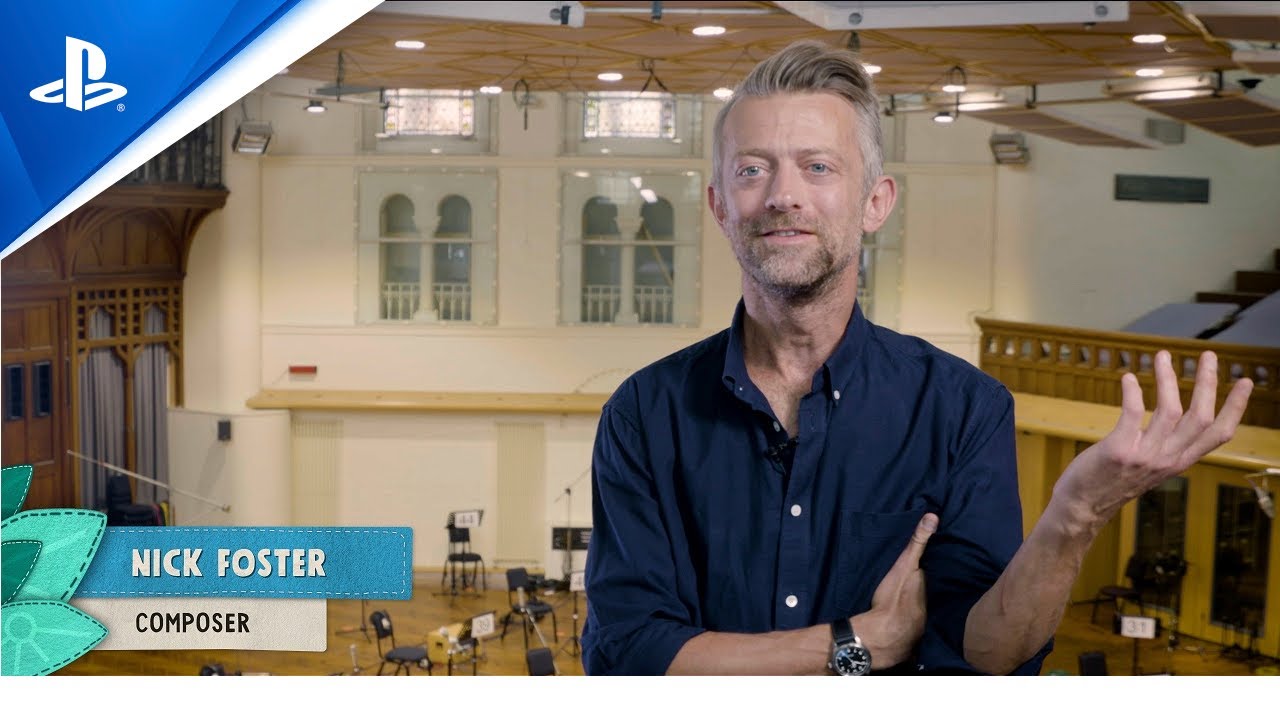 We’re all huge fans of the original LittleBigPlanet games, and many of us have worked on the franchise for quite some time now, so we’re naturally passionate when it comes to respecting its musical heritage.

As both composers and supervisors for Sackboy’s latest outing, what we considered incredibly important was having the freedom to assemble a uniquely eclectic mix, with a focus on elevating the gameplay experience and a willingness to make some brave choices.

With this in mind, the two key questions for us at the outset were: ‘how can we honour the soundtrack’s legacy yet evolve it in new directions?’ and ‘how can we broaden the scope whilst continuing to introduce fans to new and exciting music?’ 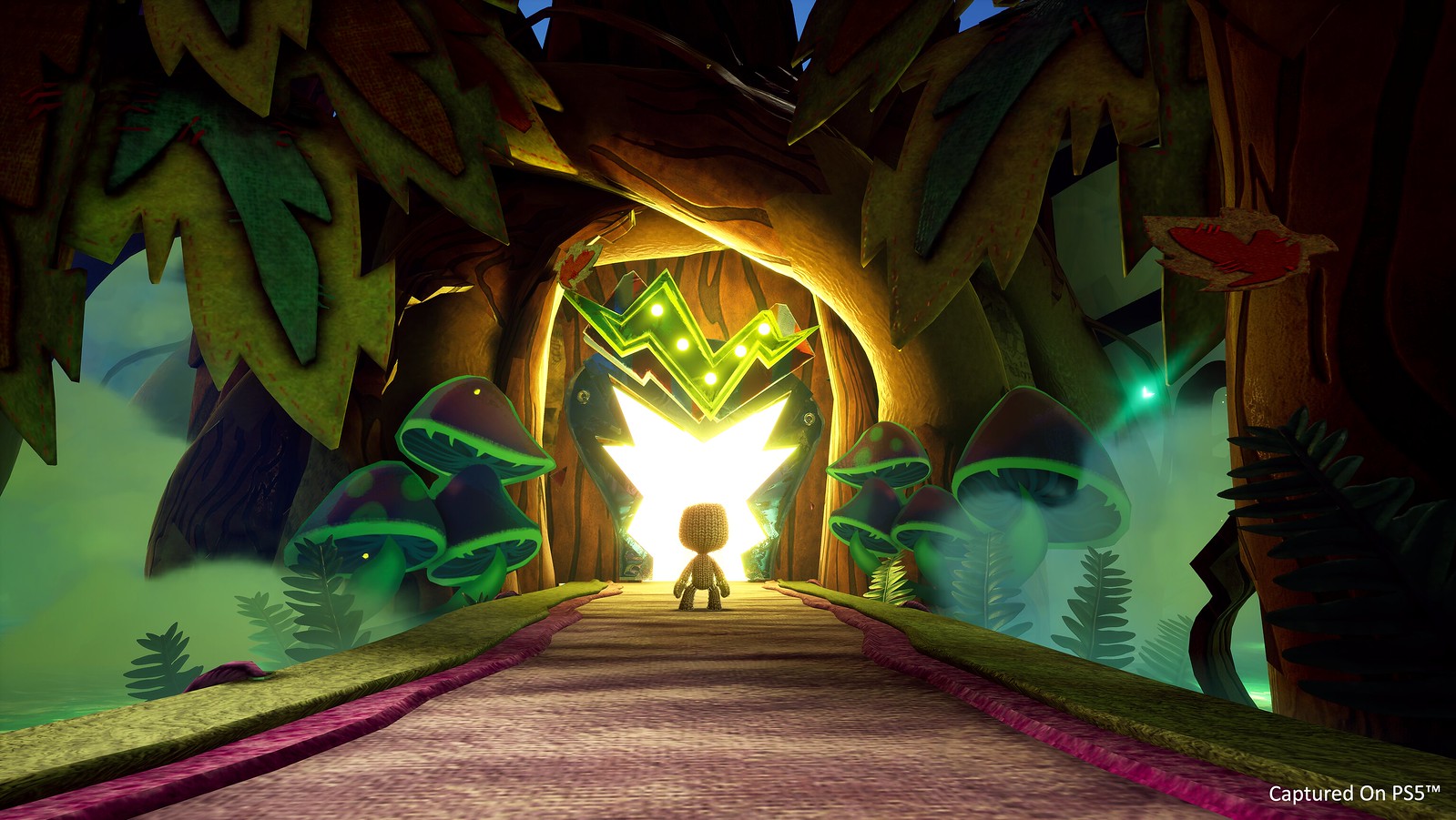 The answers to these questions we thought (well, hoped!) lay in diversifying the content even further; in expanding in all directions. So we looked at raising the stakes with more mainstream artists, yet pushed further in our endeavours to discover new talent. We explored music of a more vintage nature whilst combining this with modern production techniques. We worked even more closely with established artists and we broadened the search for unique new composers. And above all, we had a lot of fun, constantly looking for opportunities that might raise a smile from the player.

As you may already have read in Ned’s excellent blog post, variety was one of the key pillars when planning out the design direction. There was a strong desire for every level to feel unique, for the game to continually surprise the player with new and interesting game mechanics. We thought it only right that we support this with the music, so we made it our ambition to provide a unique musical experience for every one of the game’s core levels. A major aspiration for me personally was to leave players not only thrilled by the current level, but also excited about what was to be uncovered in the next.

We have a wealth of original compositions, from both new faces and franchise favourites, as well as some really exciting artist exclusives. There’s an unprecedented roster of licensed music, which spans an entire century and features everything from burgeoning new talent to superstar DJs and Rock and Roll Hall of Famers. We also wanted to look at ways in which we could experiment with a few new ideas, so have worked a number of original remixes and mashups into the soundtrack, not to mention a few more recognisable songs reimagined in a new light! 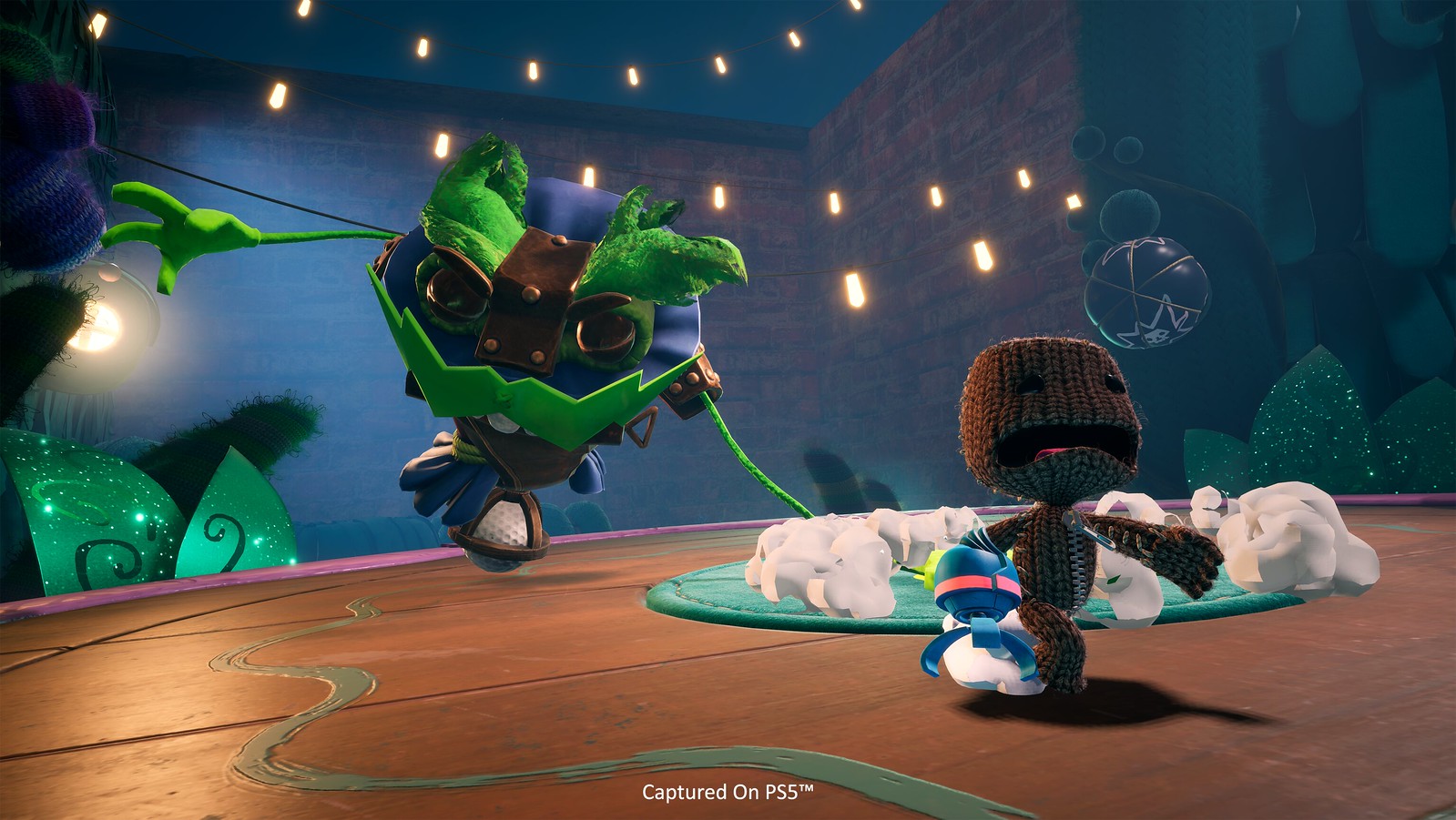 Putting the ‘Play’ in Playlist

Interactivity was always a really big deal for us. Whereas previous titles have made great use of interactive music with the composed tracks, licensed music has tended to remain a fairly linear experience. For Sackboy: A Big Adventure we wanted to rethink how we could work with licensed music – specifically how we could arrange those tracks so that they become more of an integral part of the experience.

So we made a call to implement all music interactively, be it composed or licensed. This means that every track in the game is broken down into instrumental layers as well as edited into its component sections. This allows us to not only rearrange the mix in realtime but also to choreograph the arrangement so that it adapts to the player’s actions and whereabouts.

What this means from a player perspective is that each track feels much more meaningful to the experience. The music builds through the opening moments, it evolves with the narrative, it responds to your actions, it crescendos, and it concludes the action. And the fact that we’ve been able to do this with a King Gizzard and the Lizard Wizard song is a massive bonus! 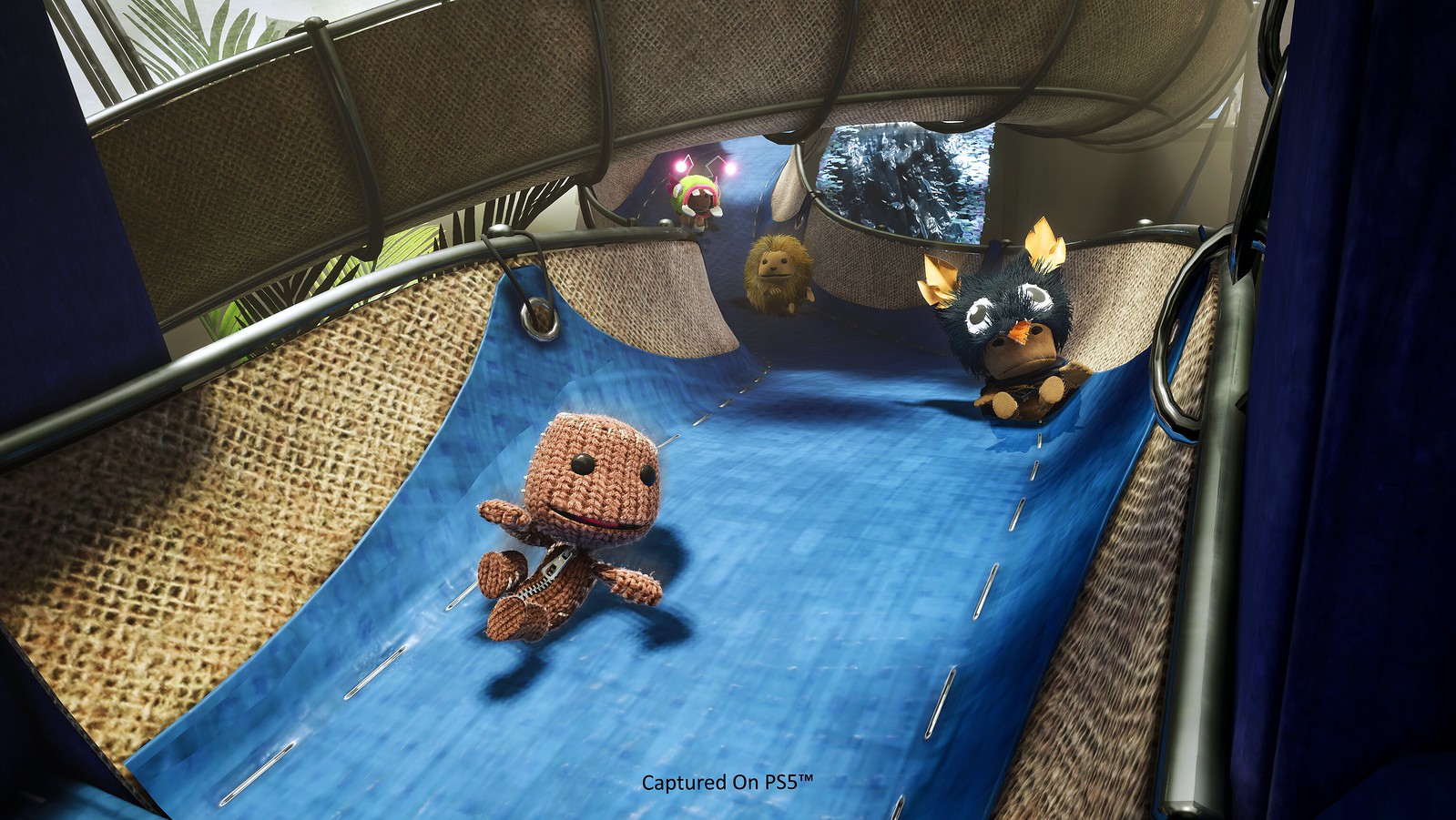 As well as the tracks themselves, we also wanted to explore how we could push musical interactivity into other areas of the sound. Quite a large number of the sound effects are rich in tonal elements, so we began thinking: ‘Can we implement these sounds in such a way that they become more intrinsic to the musical experience?’

This ultimately led to the development of both harmony and rhythm systems. These allow the sound designers to create sound effects that adapt to the key signature of the accompanying music track, as well as synchronise those events to beats and key motifs.

The outcome of this is that we now have an ensemble of sound effects effectively singing along to the soundtrack – everything from checkpoints to collectabells, level badges to key UI events. Even the disconcerting buzz of an approaching Boomblebee! 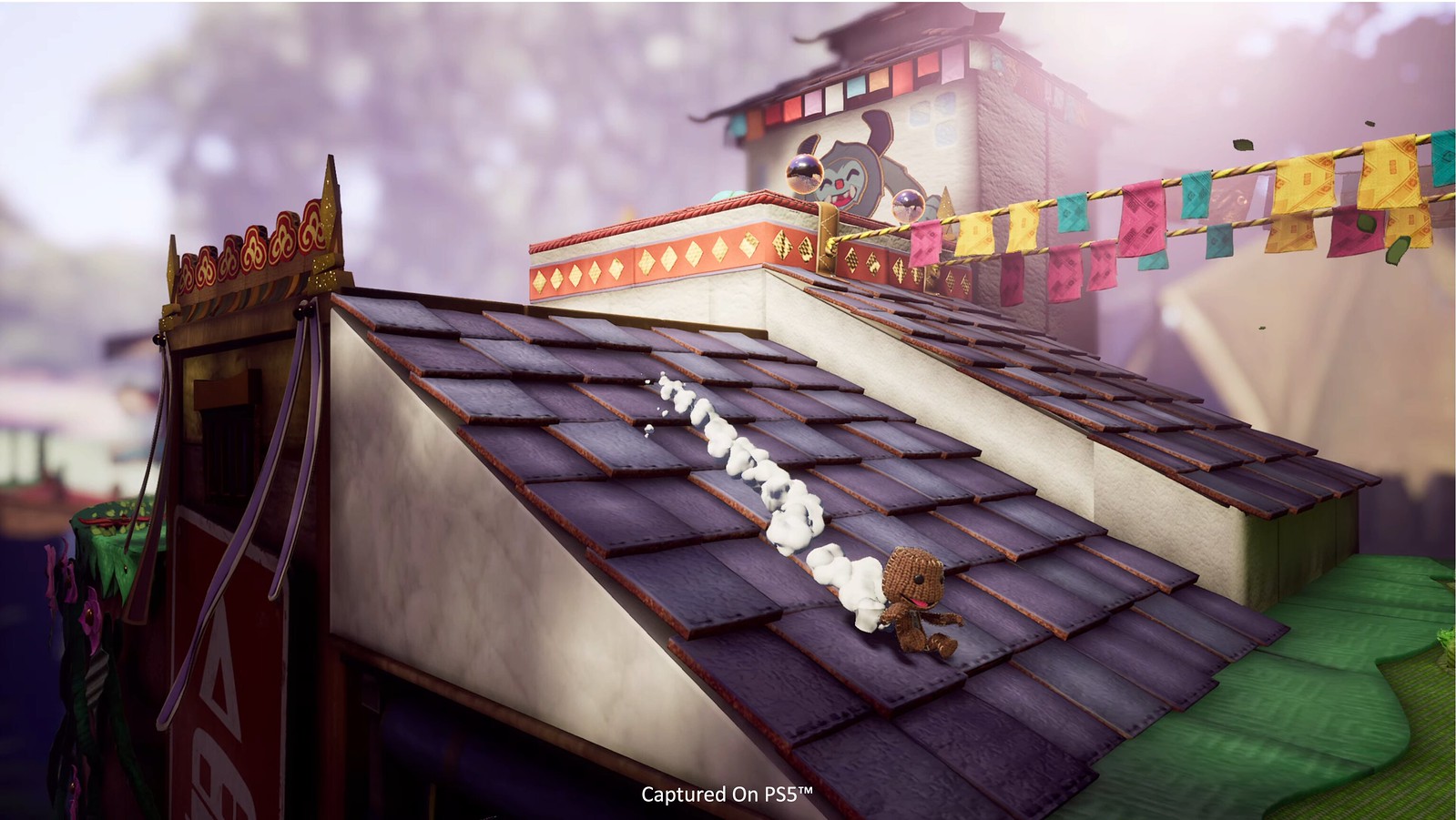 The natural evolution of these systems subsequently allowed us to create a number of, shall we say, ‘more standout’ musical set-pieces. We wanted these levels to be a more distinct experience, to feel more akin to a music video, and we wanted players to feel like they were starring in that video. However, there was also a strong desire to avoid a linear, on-rails approach that would essentially force the player through the levels. Instead we geared the design towards allowing the player to inhabit a world infused with the song, with the beat, flow and even lyrical references turning the game into one big dance party.

Anyway, that’s about enough from me for now. The official soundtrack featuring all of the bespoke music releases today across all digital platforms and you can listen to it here. We’ve also compiled an official playlist of most of the licensed music, which you can find here.

We’ve had a real blast putting this soundtrack together and I’m so excited to finally get it into your hands (and ears!) Like the game itself, it’s bursting with joy and has been a real labour of love for the whole team. There’s so much fun to be had and so many minute details that will make you smile. And I think we could all do with a bit of that right now!